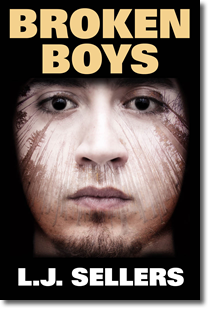 Sunday, June 25, 2:30 a.m., Portland, OR
Josh opened his eyes, half awake. What was that sound? A door opening? Not likely. His mom was the only other person in the home, and she didn’t go out late. He glanced at his cell phone on the nightstand. It was still the middle of the night. He rolled over and closed his eyes again. A moment later, heavy footsteps sounded in the hall outside his bedroom. Josh bolted upright. Someone was in their house!

The door burst open, and two huge guys rushed in.

His heart missed a beat. Dark clothes and buzzed heads, they looked like military. What the hell was this?

He opened his mouth to scream, but the intruders came at him so quickly, he never had a chance. A calloused hand pressed something sticky against his mouth and a cloth bag came down over his head.

Oh fuck! This was bad. Josh swung wildly, but powerful hands caught his arms and pulled them together. Even knowing it was useless, he tried to kick his way off the bed. The strong hands grabbed his feet and shoved his legs up against his chest. The ripping sound of tape coming off a roll made his stomach heave. With terrifying speed and precision, the thugs bound his hands and feet together and wrapped him in his own sweaty sheet.
They carried him down the hall, swinging like a trussed animal. Josh called out to his mother, but the words went nowhere. Heart hammering, he scrambled to make sense of what was happening. Some kind of drug-deal payback? His oxy action was small-time and covered only a few friends—all white, middle-class high school juniors, just like him—so that didn’t make much sense. Whatever was going on was out of control! Please let it be a mistake.

They hauled him through the living room and out the open front door. Cool, middle-of-the night air enveloped him. Josh’s panic escalated, and he couldn’t catch his breath. He moved his mouth around, trying to work the tape loose, but got nowhere. His abductors jogged him across the lawn toward the sidewalk. His visual world was black, but his gut told him a van was parked on the quiet, dead-end street. Waiting.

Frantic, Josh wiggled his jaws, the only move he could make. As the kidnappers’ footsteps hit the concrete of the sidewalk, the left side of the tape slipped off his mouth. His sucked in a quick breath and yelled for help.

A fist slammed into his face, and pain exploded in his brain. He heard the metal click of a vehicle door sliding open, then they tossed him onto a hard floor. A moment later, the vehicle’s engine started, and they rolled forward.

No! They were taking him somewhere to kill him, and he had no idea why. He would never see his mother again—and the last thing he’d said to her had been pretty crappy. Hot tears pooled in Josh’s eyes.

Sunday, July 2, 8:04 p.m., Southern Idaho
Red and blue lights flashed in her rearview mirror, and Roxanne MacFarlane’s heart skipped a beat. Damn! The freeway entrance was only a hundred yards away. They’d almost made it! She braked and pulled off the narrow country road. “Stay quiet,” she told the girl lying on the floor in the back seat. Lena, a thirteen-year-old, was hidden under a dark blanket, but if the officer decided to look around with a bright flashlight, Rox might soon be in handcuffs.

Lena whimpered, “What’s going on? Is it Dad?”

“No. Just be quiet.” Rox didn’t know why the cop had stopped her, so there was no point in alarming the girl. But Lena’s father and his new girlfriend were survivalists with a deep paranoia and an endless supply of weapons, so the teenager had good reason to be scared about going back to their isolated hideout.

Rox glanced in the rearview mirror. Even in the dark, she could see the double-white stripe of the state-police vehicle. Rural areas of southern Idaho didn’t have their own police departments, and the man getting out wore a goofy state trooper’s hat.

As he approached, Rox rolled down her window. “Good evening, officer.”
“License and registration.”

Even she could tell his tone wasn’t friendly. Not a good sign. Had Lena’s father discovered his daughter missing already and called the police? That would be surprising. Research into the prepper group indicated they were anti-establishment and more likely to carry out their own justice. Yet maybe the deputy was one of them. Rox’s gut tightened as she reached for her glovebox. Her actions weren’t technically kidnapping. Lena had come with her willingly, and Rox was taking the girl to her mother, who had joint custody. Worried that her estranged husband was off his meds and that his new girlfriend was abusive, Lena’s mother had hired Rox to find the prepper’s compound and get her daughter out.

Rox handed her license to the officer, forcing herself to smile and speak casually. “Can I ask why you stopped me?”

The heavyset trooper grabbed her documentation and grunted. Moonlight glinted off his sweaty face as he scrutinized her photo with a penlight. “You were driving too fast on a quiet rural road. What are you up to?” His accusation had a slight accent she didn’t recognize.

Rox had prepared for this. “I’m just passing through. I got off the freeway to let my dog out to pee, and he disappeared.” Lying was the hardest part of this work. Her atypical brain leaned toward compulsive honesty. But she’d trained herself to think of the necessary fabrications as stories she had to tell.

“What’s his name?”
Who? Oh right, the make-believe dog. “Marty.” Her stepdad would be amused. He’d been working this case with her until his knee gave out and his doctor ordered him to stay off his feet for a few days. She’d left without telling Marty she was doing the extraction alone.

“Huh.” The cop shifted his weight. “We’ve had some break-ins around here, and your car matches the description. I need to search it.”

Rox’s pulse escalated again. “As you can see from my license, I’m from Oregon and just passing through. I also used to be a police officer and a CIA agent.” Both true. Rox paused to let him digest that information. “I know my rights. You have no cause to search this vehicle.”

“Step out of the car!” His voice was no longer deadpan, and he apparently didn’t believe her.

Oh hell. Rox was torn. If she complied, he might not shine his flashlight into the back and discover her hidden passenger. But if she got out, the belligerent trooper might feel compelled to handcuff her and search the car anyway. Then Lena would end up back with her crazy father and his extremist girlfriend. Rox couldn’t let that happen. “This is harassment. What’s your name and badge number?”

“Get out of the car!” He grabbed a heavy flashlight from his belt loop and slammed it against the metal door, startling her.

The prick! With shaky hands, Rox picked up her phone from the seat next to her.
The trooper yanked out his weapon and aimed it at her head. “Let me see your hands!”
Shit! This guy was a loose cannon. “It’s just a phone! I’m calling your supervisor to report this harassment.” She hit the button to roll up her window, then pressed 911.
The cop kept yelling, his face distorted with anger and his voice booming through the glass. Would she get shot and killed here today, beside the road in a bleak area of Idaho?