Putting Sex Back in the Series 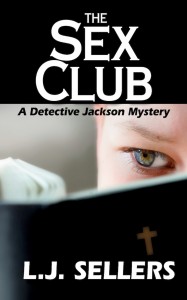 After all the trouble of taking Sex out of the Jackson series, I’m about to put it back. Some of you may be thinking, It’s about time. But those of you who know the series, know that I was talking about The Sex Club, the first book to feature Detective Wade Jackson.

Late last year, I pulled it as the lead Jackson story and moved it into my standalone thriller category, mostly for political reasons (see blog). The book features a Planned Parenthood nurse and crazy anti-abortionist (protagonist and antagonist, respectively), and I made the change so the first book in the series would be more palatable to all readers.

I worried that some readers would simply be turned off by the title. Many other readers bought the book for the title. Either way, at this point Amazon Publishing/Thomas & Mercer owns the rights, and they plan to market it as part of the series. By the time their version comes out in January with all the other Jackson books—including the new one, Rules of Crime—I’ll have modified my website, bio, and book listings to match up with Amazon’s marketing.

Once again, The Sex Club will be the first title many readers see when they visit my website or see a list of my books. I have mixed feelings about this. I love the story, and I’m proud to be its author. But it’s the only title I have that doesn’t really reflect the crime-fiction genre that I write in. Hopefully readers will look beyond that book and see that I’m really about crime, violence, and death. 🙂

When my kids were growing up, I used to say I’d rather they watched sex scenes in movies than violence, but that’s another subject.

For the record, I could have objected to the strategy to market The Sex Club as a Jackson story. Amazon is very concerned with my input and involves me in all decisions. But I trust them to know what they’re doing. And I’ve felt guilty about moving the book since I made the change.

The Sex Club is different from the others. I wrote it as a standalone with two main characters, one a nurse and the other a homicide detective. So it’s little different from my other police procedurals. But I knew I might bring Jackson back. And for readers who like to start at the beginning of a character’s development, it’s only fair they know about the first book. (Which I’ve tried to do anyway by including phrases like “featuring Detective Jackson” in my marketing text.)