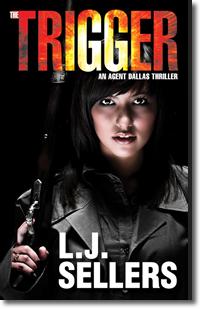 Agent Jamie Dallas charged across the opening and dove behind a barricade. A shot flew over her head as she lunged, missing her by an inch, and landed with a thunk in the wall behind her. Damn! That was close! Heart hammering, she crawled to the end of the short wooden structure. The bastard was close now, firing nonstop. But where the hell was he? She peeked around the edge, hoping to spot him in the dim light. Another shot nearly hit her cheek, and the whistling noise made her heart skip a beat.

But now she had his location. He was in the burned-out church, shooting from a high window to her left. How to lure him out into the open? Playing dead might work. Dallas pulled in a deep breath and tried to feel calm, but adrenaline made her heart ring in her ears. She counted to sixty, the wait nearly unbearable. The faint sound of footsteps on stairs signaled that her ploy had worked. He was coming to her. Another twenty seconds passed while he stood in the doorway, assessing the situation. Or so she assumed. From her squat behind the barricade, she couldn’t see him, only feel his presence.

It was time. Dallas ripped off her mask with one hand and shoved it into the air. As the mask drew fire, she lurched out from behind the wall, blasting at the figure in the doorway with her other hand. She nailed the assailant with three shots in row.

“I’m hit,” he called out, his voice squeaky and disappointed.

Dallas pumped her arm in the air, grinning. She crossed the dirt-and-straw floor and shook Nick’s hand. He was only fourteen, but he was a paintball champ and she’d beaten him and his companions three games in a row.

“That was sneaky,” he complained.

“I know, but it’s survival.” She glanced at his sweet young face and paint-splattered clothes and felt a pang of guilt. It wasn’t fair to take her frustrations out on the kids. “Good game.” She offered him a high five, set her long hair loose, and headed for the front counter. She felt the boys watching her as she walked. Even at twice their age, she was still young and fit enough to garner their attention.

But paintball—and occasional skydiving—on weekends wasn’t enough to satisfy her need for excitement. She’d been cooped up in the Phoenix FBI office with white-collar crime for a couple of months and it was making her crazy. Her last undercover assignment had sent her to Oregon, where she’d infiltrated an eco-terrorist group and prevented a bombing. That was the kind of work she was meant to do. If she didn’t land another field assignment soon, she might have to take a black-ops freelance gig just to stay sane.

Dallas paid her account and stepped outside. Time to move on.

“What the hell are you doing?” Randall Clayton stared at his wife across the bedroom. A stuffed suitcase sat on the carpet, and Emma tossed more clothes into an overnight bag on the bed.

“My mother’s sick, and I’m going to stay with her for a while.” His wife turned and glared. “We talked about this.”

“And I said no.” Randall crossed his arms, still blocking the doorway. The timing couldn’t be worse! He had a flash of hatred for her mother. “The meltdown could happen any moment! What if we have to blow the bridge and you can’t get back to Destiny?”

Emma rolled her eyes, distorting her pretty face. “You’ve been predicting it for ten years, including the five I’ve been here. Nothing’s going to happen while I’m gone.”

“You don’t know that! The financial system is on the brink of collapse, and an asteroid hit the Earth just last week. And they expect more.” Randall strode forward, grabbed her arm, and forced her to look at him. “I know your mother. She’ll guilt-trip you into staying for a long time. She never liked me.”

Emma jerked free. “Her heart is failing, and I’m going. Get out of my way.”

Her anger excited him, as it always did. But even if they had crazy-rage sex like they often did, it wouldn’t change anything. Randall fought to control himself. “You’re not taking Tate.” Their four-month-old baby watched from a car seat on the floor.

Damn! The birth of their son had changed Emma, made her more defiant. Randall’s heart hammered in full panic. He couldn’t let this happen! They were so close to being ready, and Emma knew too much to let her go. But how to stop her? A dark thought crossed his mind. Could he get rid of her for the greater good? Randall hated the idea. There had to be another way.

Spencer would help him. His older brother had been there through all of his troubles, and they’d built this community together, starting with their side-by-side houses. Randall strode from the room. As soon as he was outside, he broke into a run, knocked once on Spencer’s door, then barged in.

He found him sitting by Lisa’s bed, as usual. His brother’s wife had been dying of cancer for years, and she seemed down to her last few days.

“What do you mean?” Spencer kissed his wife’s gaunt face and stood. Lisa appeared to be sleeping.

Randall explained briefly about Emma’s mother, then added. “What if she takes a long time to die, like Lisa has?”

His brother cringed, but Randall knew he understood. They needed wives to produce the next generation.

“Do you want me to talk to her?” Spencer headed for the living room.

“It’s too late,” Randall said, following him. “Emma’s packing and planning to take Tate. We have to stop her, and there’s only one way.”

Spencer spun around, eyes wide. “What are you saying?”

Randall worked up his courage. “It’s time to quit waiting and make the meltdown happen.”

Spencer paused, blinking rapidly. Finally, he said, “We’re not ready. We haven’t sold the business yet, and the generator isn’t performing as well as it should. Most important, I don’t have a new wife.”

Randall reached for his brother’s shoulder, the way Spencer had always done with him. “We can delay the trigger for a few weeks, but we need to deal with Emma tonight before she leaves.”

For a decade, they’d been stockpiling everything they would need, waiting for a social collapse or earth-changing storm that hadn’t happened yet. It was time to take charge.

“Are we sure we want to do this?” Spencer asked, his voice trembling a little.

“What choice do we have?” Randall filled with passion for their cause. “Global climate change is out of control. You know that if we don’t shut down the major polluters and vehicle emissions now, the planet will become uninhabitable and our species will die. Everything we’ve talked about over the years is still true—only worse than ever.”

Spencer’s face grew pale and his eyes troubled. “It will be chaos out there, and eventually millions of people will die.”
“They’re going to die anyway.” Randall didn’t let himself think about it. “This way will be faster and less painful. Like euthanasia for a diseased society.”

Spencer nodded. “The waiting is getting to all of us. We can’t afford to lose anyone else from the community, and we can’t live in limbo forever.”

Randall’s nerves jangled with excitement and dread. This was the moment. He and his brother stood at the edge of a bottomless cliff, about to step off, hoping the hang glider they’d built themselves took them down safely.

“What about Emma?” Spencer asked.

Randall was ready. “I think I have a plan.”

Dallas entered the Phoenix bureau, pulled on her business jacket to survive the air conditioning, and headed for her office. Before she sat down, her desk phone rang—an internal call. She snatched it up, hoping like hell it would be an interesting assignment. Another day at the desk might break her. “Agent Dallas.”

“It’s Gossimer. I need to talk to you about an undercover assignment.”

Hallelujah! Dallas hustled down the hall to the corner office and didn’t bother knocking. “Good morning, sir.” She sat, e-tablet in hand, and grinned. “What’s the assignment?”

“Don’t look so happy.” Special Agent Gossimer, a handsome man in his early sixties, had a crease in his brow. “This one would put you in a rural area in Northern California with a group of people preparing for the end of civilization.”
“Preppers, huh?” Dallas was intrigued. The movement had been gaining steam in recent years. “What’s the bureau’s interest?”

“The community is led by two brothers, Spencer and Randall Clayton. Randall’s wife, Emma Clayton, disappeared last Wednesday, along with their four-month-old son. She left on the evening of May first to go see her sick mother in San Francisco, but never arrived. Her mother called Emma’s father to see if he’d heard from her. Luke Caldwell contacted the bureau because he’s convinced Randall is holding his daughter somewhere on the Claytons’ property.”