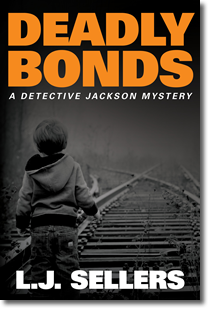 When a young mother is found murdered in a derelict Eugene neighborhood—and her terrified young son is discovered hiding beneath the floorboards—Detective Jackson reluctantly takes the case.

His own life is already in chaos, with his runaway teenage daughter, Katie, still gone and his girlfriend, Kera, facing her own family crisis. Matters get more complicated when the orphaned boy bonds with Jackson, triggering unexpected emotions and compromising his ability to investigate.

Meanwhile, Detective Evans, one of Jackson’s most valuable colleagues, is pulled off the case to look into the death of a University of Oregon football star—leaving the homicide task force shorthanded. As Jackson works to solve the murder and find a home for little Benjie, he soon faces devastating choices that threaten everything he holds dear.

“A well crafted book, a good plot and a variety of interesting characters – Deadly Bonds is a marvelous addition to the Jackson stable.”—Milo’s Rambles

“This story is an intriguing murder mystery with a cast of well developed characters and unpredictable plot. I recommend this book and rank it as one of Sellers’ best.”—Authors on the Air

“Deadly Bonds is a really enjoyable detective novel and I would definitely want to read others in the series. Highly recommended!”—Snazzy Books

Available from Amazon in print, ebook, and audiobook formats.