Passions of the Dead Excerpt 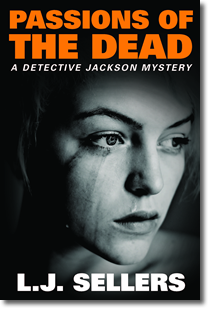 “Final decisions about layoffs will be announced Friday.” Sergeant Lammers panned the room, stopping to make eye contact with Jackson. He and fifteen other detectives were crammed into an overheated conference closet. They shifted in their seats and tried not to glance at each other.

“Two detectives will be cut, one from vice and one from violent crimes.” Lammers’ voice was deadpan, and for the first time in his twenty-year career, Jackson worried he might lose his job. He’d been written up and suspended recently, and now he had a health issue the department might consider a liability. What would he do if he lost his job? He was still a month away from his twenty-year pension.

The door flew open and a desk officer rushed in. “Excuse me, Sergeant, but there’s been a mass homicide. Four people dead in a house at 1252 Randall Street. No reports of the assailant. A relative found the bodies and called it in.”

A mass of men in dark jackets jumped to their feet, and the air hummed with adrenaline. Lammers shouted over the din. “I want Jackson, Schakowski, McCray, Quince, and Evans at the scene. Everyone else is on standby for assignments as needed.” Lammers strode toward the desk officer. “Get the mobile crime unit out there. I’ll call the DA and the ME.”
Jackson hustled toward the door, thinking for the moment he still had a job.

As he raced over Ferry Street Bridge with the rushing water of the Willamette River below, Jackson worried about what was happening to his hometown. For most of his life, Eugene, Oregon had been a safe midsized college town—a tree-loving, friendly place to grow up in, with the mountains and the ocean only an hour’s drive away. A perfect place to raise his child. Now Eugene was a small city with a growing crime rate, a meth scourge, high unemployment, and a dying downtown—and no money to fix anything. They’d never had a mass homicide though. He’d worked several murder–suicides in which a man had shot his wife or girlfriend then himself, but never a crime scene with four people killed. What if some of the victims were children?

The home was in the Coburg Road area, in one of the older neighborhoods where the real estate had less square footage but bigger yards. A modest house that needed paint but otherwise looked cared for. The front lawn had been recently mowed and someone had planted petunias along the walkway—signs of an unusually warm month of May. A red F-150 pickup and an old green Subaru sat side-by-side in the driveway. The Subaru sported a bumper sticker bragging about a Student of the Month and another that said I Love Al Gore.

Two patrol units sat out front in the curve of the long cul-de-sac. One of the officers was on the sidewalk next to a weeping woman with a cell phone to her ear. An older couple huddled together at the edge of their adjoining yard, and across the street a woman in sweatpants stood on her front step, watching the activity. Another blue Impala screeched to a stop behind him.

Jackson climbed out of his car, wishing he’d taken some naproxen before leaving headquarters. The pain his ten-inch abdominal scar still produced surprised him. His kidneys, which had been compromised by the fibrosis, also bothered him if he moved too fast. As he approached the people on the sidewalk, the uniform officer said, “This is Rita Altman. Her sister is one of the victims inside. She came by this morning to pick her up and found them.”

The woman, late thirties and heavyset with hair to her waist, glanced at Jackson, then continued weeping into the phone as she described her ordeal to a listener.

“Don’t let her leave. I need to talk with her in a minute,” Jackson said and hurried past. He needed to get inside the home and see the scene before it was swamped with people doing their jobs. Behind him, the scream of an ambulance raced up Harlow Road. Why the siren? Jackson wondered. They wouldn’t need its paramedic services, just its cargo space to transport bodies.

Ed McCray, an older detective fond of brown corduroy, joined him on the sidewalk. They looked at each other without speaking, then started for the house. Jackson visually searched the driveway as they walked past the cars. He had a small hope of finding something the killer might have dropped.

At the threshold, Jackson grabbed paper booties and latex gloves out of his shoulder bag. McCray did the same. Jackson suspected today he would need nearly everything the bag held: flashlight, crime scene tape, an assortment of pre-labeled paper bags and clear plastic bags, a box of latex gloves, tweezers, and three cameras: film, digital, and video.

He braced himself, nodded at McCray, then pushed though the door. A sour metal smell soaked the air, overpowering even the odor of meat scraps in the garbage. The front door opened into a narrow hallway with vinyl flooring, bordered by a step down into a carpeted, crowded living room. With a sweeping glance, Jackson took it all in. Two well-worn couches huddled around a big TV, a cluttered desk in the corner with an older computer, a bookshelf with more sports trophies than books, and a wall covered with family photos.

Then he saw the wide archway into the kitchen. And beyond it, the bodies.

A patrol officer squatted near the bloody mess. He jumped at the sound of their footsteps. “This girl is alive,” the officer said in an excited rush. “After we cleared the house, I went back to the kitchen to stand guard. I was taking pictures and realized she was still breathing, so I called for an ambulance.”

A survivor! Thank God. Someone would be able to tell them what the hell had happened here.

Buy Passions of the Dead.