Secrets to Die For Excerpt 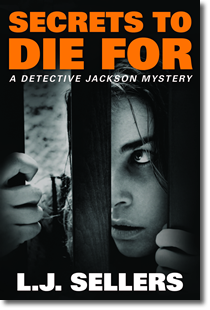 Raina shut off the motor and glanced up at the puke-green doublewide with a chunk of plywood over the front window. The near dusk couldn’t hide the broken dreams of the trailer’s occupants, Bruce and Cindy Gorman. Raina wasn’t here to see them. She was here for Josh, their eight-year-old son.

As a children’s support advocate, Raina had been assigned to monitor Josh six months ago, when the state of Oregon had taken temporary custody and placed the boy in foster care. Her primary responsibility was to stay in touch with Josh and to ensure the system did not fail him. During that time, the Gormans had danced all the right steps–anger management for him, parenting classes for her, and a rehab program for both. So now Josh was back in their care, and this was Raina’s last official contact…for now.

Her heart was flip-flopping, just like it did on her last day of high school. She was happy for Josh, but she despised Bruce and would be glad to never see him again, even though she knew it was petty to feel that way. Raina wished she were more mature, more objective, like the other CSA volunteers. At twenty, she and Jamie were the youngest in the group. Raina had become quite fond of Josh and would miss him terribly. She loved their long walk-and-talks along the river path, with Josh pointing out every bug he saw. It had been like having a little brother. Her counselor had been right when she’d advised Raina to do some volunteer work. Giving was the best way of receiving.

Raina stepped out of the Volvo and pulled in a quick breath of frigid February air. The smell of dog shit assaulted her senses. So much for her lofty ideals. She hurried to the door, hoping the dog, a Boxer named Brat, was either locked in the bathroom or deep in the woods behind the trailer. Raina shivered in the cold foul silence. The house was at least a half mile from the nearest neighbor.

Bruce pulled the door open a few inches before she could knock. “Josh is in bed, so come back tomorrow.” His voice was raspy from a lifetime of cigarettes, and his hairline had gone north on both sides. Bruce should have been a big man, but years of slouching took inches off his height and an old meth habit left him scrawny in a way that rehab couldn’t fix.

“I just need a few minutes with him, so I can make some final notes.”

“I told you, he’s not feeling well,” Bruce said through clenched teeth.

“Then all the more reason I should see him.”

“Not now.” Bruce started to close the door.

Raina stood her ground. “The custody order isn’t final yet. They’re waiting for my report. And it’s not convenient for me to come back tomorrow. I have classes.” She sounded braver than she felt.

“Don’t threaten me, you snot-nosed little–”

Cindy’s voice boomed from the kitchen. “Let her in, Bruce. Might as well get it over with.”

Raina wasn’t sure she still wanted to enter the trailer. She needed to know that Josh was okay, that the boy hadn’t changed his mind about going home to his parents. He had been quite excited on Sunday when she and Josh’s caseworker had picked him up to bring him here. The image of him standing on the ramshackle porch with his faded duffle bag, looking uncertain, haunted her. Raina had not slept well since.

“Josh, come out here for a minute!” Cindy yelled down the hallway. Raina cringed. Her mother had been a screamer too.

Bruce kept the door blocked. He turned his head and hollered, “Stay in bed!” Then to Cindy, he yelled, “Goddammit, woman. Don’t contradict me. That little bitch is not coming in, and Josh is not coming out.” Bruce turned back to Raina and growled through the partially open door. “You better forget you came out here tonight. And this conversation better not end up in the file.”

Then it hit Raina. The paranoia, the anger, the need to dominate. She knew all the signs. She had witnessed them plenty as a child. Bruce was using again. He was high on meth right now. Oh dear God.

Raina took a step back. Every muscle in her body wanted to run for the car. It had always been her instinct as a child too. It was a mistake. Meth dopers often had predatory responses. If you ran, they attacked. Raina still had the scars. Her mother had been quite quick on her feet.

Raina coached herself to stay calm. Just nod and move away slowly. Don’t make eye contact. Get to the car and lock the doors.

She took a step back. What about Josh? Was he okay? Panic pushed out of her stomach and into her throat. Had they already abused him? Is that why Bruce didn’t want her to see the boy?

Without thinking, she called out, “Josh, are you okay?”

Oh shit. Why had she done that?

“Fuck you.” Bruce leaned out the door, no longer caring that she could see his hugely dilated pupils. “You don’t know a fucking thing. Get the fuck out of here and keep your fucking mouth shut.” Spit flew from his mouth with every f. “If we lose Josh again, I’ll fucking kill you.”

Raina inched back, a half step at a time, feeling for the edge of the porch with her toes.

“Move, you little bitch.” Bruce lunged through the door.

It was only thirty feet to her car, but every step on the dirt path felt sticky and treacherous in the near dark. Heart pounding, she reached the Volvo, yanked open the door, and jumped in. Her knee slammed into the steering wheel, but she didn’t have time to process the pain. Eyes watering, Raina hit the automatic door lock and started the engine.

Only then did she look up. Bruce was barreling toward her, about ten feet from the car. Raina shoved the gearshift into reverse and hit the gas. As she cranked the wheel left, aiming for the gravel turnaround tucked into the trees, Bruce slipped and went down hard. Raina let out her breath, jammed the transmission into drive, and sped down the gravel road, bouncing through every pothole instead of taking the time to go around. For a fleeting second, she wished she had run over Bruce while he was down.

Raina cursed herself for coming out here. She had been advised to see Josh only in neutral settings. She cursed herself for handling the situation so badly. Drug addicts! Disease or not, sometimes she hated all of them. Dead mother included.

Raina checked her rear view mirror for headlights but didn’t see anyone coming behind her. Maybe Bruce had hurt himself when he fell. Or perhaps he’d decided to take out his anger on Cindy because she was closer and easier. Raina desperately hoped he would leave Josh alone.

She decided to go straight to the police. She couldn’t prove that Josh was in immediate danger, but Bruce had threatened to kill her. That had to be against the law. The bastard. He’d better not hurt Josh. As soon as she was on the main road, she would call Mariah Martin, Josh’s caseworker at Child Welfare Services. Mariah would get a court order and get Josh out of that hellhole by tomorrow.

Distracted by her scattered thoughts, Raina almost missed the single curve in the quarter-mile driveway. She braked and pulled hard on the steering wheel, barely keeping the car from smacking into a giant Douglas fir. It was dark now, and she was anxious to get back into the bright lights and safety of Eugene city streets. She didn’t want to die in one of those mysterious single-car accidents, so she kept her speed reasonable. Raina checked the rearview mirror again. No car lights behind directly her. With Pine Grove Road only a hundred yards ahead, she started to relax.

Out of nowhere came a loud popping sound. Not quite like a gunshot, but loud enough to jumpstart her heart into frantic mode. Instinctively, Raina pressed the gas pedal, but the car didn’t respond well. It pulled to the left and made a grinding sound. Oh no. She’d blown a tire and was riding on the rim. She had probably run over something sharp. Shit, shit, shit! Of all times.

Raina tried to keep driving, thinking it would be better to reach the road, but the grinding was unbearable, so she coasted to a stop. Now what? She knew how to change a flat tire; her grandmother had made sure of that. Yet the sliver of moonlight wasn’t enough, and crazy Bruce was still back there somewhere. Be smart, she told herself. Call for help.

Raina reached into her purse for her cell phone, thinking she would call Jamie first. Jamie would bring her dad. Mr. Conner would have a spotlight in the back of his truck and make short work of changing the tire.

The call wouldn’t go through. Damn! Seven miles out of town, and she couldn’t pick up a tower. She tried again. Dead air. Raina decided to step out of the Volvo just long enough to try the call again. After a quick glance back down the road, she unlocked the door and pressed speed-dial #2. As she reached for the handle, the door flew open and a powerful force yanked her from the car.

Raina started to cry out, but her head smacked against the hard metal at the top of the door opening. Searing pain paralyzed her voice, and all that came out was a pathetic mewing sound. A calloused hand with an odd metal smell clamped over her mouth. Raina struggled, but a big arm squeezed her like a python holding its next meal. Fingers plunged into her hair, then slammed her head against the side of the car.

More searing pain. Oh God, he was going to kill her.

Bam! Her head smashed into the car again. As she passed out, Raina’s last thought was, I love you, Jamie.

Kera was talking, but Jackson wasn’t listening. He couldn’t stop thinking about sex. After two years of near celibacy at the end of an angry marriage, he had met this incredible woman and now he was obsessed. He was sharing Valentine’s Day and a plate of tasty beef tournedos with a gorgeous intelligent woman–and all he could think about was getting to her house and getting naked.

“I’m sorry, this isn’t interesting to you.” Kera looked concerned for a moment, then laughed. “But you really should try to hide it better.” Her green eyes twinkled with amusement. In the short time he’d known her, Jackson had been surprised again and again by how resilient this woman was.

Buy Secrets to Die For.