Silence of the Dead Excerpt

Silence of the Dead (A Jackson & Dallas Thriller) 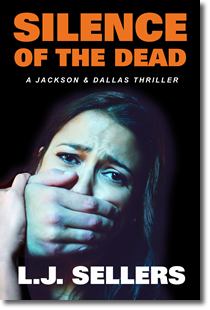 Detective Wade Jackson hurried into the conference room and took a seat, his body tense. Meetings that involved all the detectives in the Violent Crimes Unit were never good—usually new rules to follow—but this one had been called only a few minutes ago. Shit was going down somewhere.

“Listen up!” Sergeant Lammers bellowed from the front, her six-foot body expanding the volume.  “I have bad news. Officer Darren Mitchell was shot in the head this morning as he made an arrest.”

Jackson inhaled sharply. He’d never met the patrol cop, but a wave of sadness washed over him.

Lammers waited for the murmurs and cursing to subside, then held up a hand. “I’m sorry to report that Mitchell died on the way to the hospital, but the suspect is in custody.”

“How the hell did it happen?” Jackson asked. Their training was supposed to prevent those tragic deaths.

“We don’t know yet.” Lammers’ voice was tight. “The arrestee, Dominic Bulgar, has a history of drug crimes and violent assault, but there’s some confusion about where the shot came from.”

A chill ran up Jackson’s spine. None of them were safe. Half the population seemed to have lost their minds and morality.

“I’m taking the lead on the investigation,” the sergeant continued. ‘I’ll handle as much as I can, but I need help from all of you. Please prioritize whatever tasks I assign.”

She hadn’t needed to say it. Apprehending a cop killer always came first. Jackson was glad he didn’t have an active murder investigation going. He and his team had wrapped up a case a few days earlier, and he’d finally finished writing the reports late yesterday. He would be able to take on whatever the sergeant threw at him.

“The shooter is most likely the perp we already have in custody, but it’s also possible that it was someone connected to him who was at the house when the officer arrived.”

“Or anyone with a grudge against Mitchell,” someone mumbled.

“Right. So I need everyone to look back through old cases for other potential suspects, then send the leads to me.” Lammers locked eyes on Jackson. “I need you to find his wife and break the news, then ask her who might have a personal grudge.”

“Sloan Mitchell. I’ll give you access to Darren Mitchell’s personnel file so you can peruse it for anything that pops.”

Lammers looked to the end of the back row at Rob Schakowski. “Schak, I want you to join me for the suspect’s interrogation. Meet me downstairs in twenty minutes.”

“Will do.” Schak nodded his buzz-cut head.

Jackson would have preferred to conduct the interrogation, but they were all a team and it didn’t matter. Lammers continued to hand out assignments, then announced, “We’ll meet back here at seven this evening. Get some dinner beforehand.” She gestured for the group to leave. “Be safe!”

As other detectives stood, Jackson sat for a moment, processing the news of the officer’s death. The department had lost three men to the pandemic that year, and others had quit or retired, including two detectives. Which explained why Lammers was heading the investigation. She knew other cases would keep coming, and they would all be working round the clock until the cop killer was apprehended.

Jackson glanced up to see Lara Evans, her heart-shaped face solemn, her athletic body tense. Just the sight of her made him feel better about the human species, which he’d lost a lot of faith in recently.

“Yep.” Jackson stood, and they walked out together. Knowing he would be working those late nights with Evans eased some of his stress. She’d started in the Violent Crimes Unit five years earlier, and his attraction had been immediate. But as her mentor, he’d shelved those feelings—then he’d met Kera shortly after. They’d fallen in love and dated happily for years. But life had thrown them one curveball after another, each taking a toll. Their forced separation had been the worst, and during that time, Jackson’s feelings for Evans had resurfaced.

He’d recently spoken with a counselor for the first time in his life and confessed how much he loved Evans, which had only intensified his internal conflict. He and Kera were about to move into a rental together. If he didn’t make the break now, he would settle into a life with her and their boys—and never know if an intimate relationship with Evans could work.

They reached their cubicles on the second floor, and Evans patted his shoulder. “Sorry you got the grim duty.”

“Lammers must be mad at me.”

“She knows you’re good at it.”

Footsteps sounded, and Evans pivoted to Schak as he approached. “She gave you the interrogation because she thinks you’re too old and fat to be out in the field.” Evans winked at their barrel-shaped teammate.

“I am.” Schak grunted. “My feet can’t take that door-to-door shit anymore.”

“I’d better get on it.” Evans sounded energetic as usual. “Officers are at the scene now, waiting for me to coordinate the neighborhood interviews.” She gave a small wave and walked toward the stairs leading down to the back parking lot.

“I have to find the widow.” Jackson sighed and stepped into his cubicle.

At his desk, he opened the link Lammers had sent, accessed Darren Mitchell’s personnel file, and quickly found his spouse: Sloan Mitchell, age 35, self-employed life coach. Jackson jotted down her details, including home address, on the old-school pocket notebook he still carried. He called her phone number, but a voice message picked up: “This is Sloan, and I’d like to help you find your path. I’m sorry I missed your call. Leave me a message, and I’ll get right back to you.”

Jackson hesitated. He needed to speak with her in person, but he couldn’t do that until he tracked her down. “It’s Detective Jackson, and I’m headed to your home now. Please wait for me there.” Ominous and vague. She would know it was bad news. He stood and braced himself for the task ahead.

The upscale home in the South University neighborhood was bigger and fancier than Jackson had expected. On a cop’s salary, Mitchell probably hadn’t been able to afford it alone, so his wife was likely doing well with her business. Life coach. Hah! What a racket. But Jackson hoped whatever skills she’d developed would help her cope with her husband’s death.

No vehicles were in the driveway, but the three-car garage might be full. Jackson hurried to the door and rang the bell, but instinct told him no one was home. Too quiet. He waited, pressed the buzzer again, then pounded on the door. “Detective Jackson, Eugene Police.”

After a few more minutes, he left Sloan another voice message, then headed back to his sedan. What now? He couldn’t just wait for her to return. She might be out of town, or anywhere.

A young boy walked up the street. Jackson hoped it wasn’t the Mitchells’ son, but he hadn’t noticed any kids in the personnel file. Stress and guilt roiled in his gut. He and Kera had two young boys in their care—children who had already experienced abandonment—and they would be traumatized if he broke up their family. They were still preschoolers, Jackson reminded himself. The boys would handle it better now than later.

He started the engine and headed for his house a few miles away. Kera had the day off and was likely home alone. He had to tell her now. They were scheduled to sign the rental agreement tomorrow.

Jackson’s heart pounded as he stepped into the house he’d lived in most of his life. At least now he wouldn’t have to move. Kera stood in the kitchen, an empty cardboard box on the floor beside her. She was packing already. Tears welled in his eyes.

“Wade. What’s going on?” She moved toward him, concern in her eyes.

Damn, she was striking. Tall, with long bronze hair, wide cheekbones, and full lips. And so loving. Could he really do this to her? She had already lost so much—her son in the war, then both parents recently to cancer. In his therapy session, Jackson had come to realize that he’d stayed in the relationship too long out of guilt and fear that his rejection might be Kera’s breaking point.

Jackson blinked back the tears. “Uh, a patrol officer was shot and killed this morning.”

Kera hugged him. “I’m so sorry to hear that.”

He squeezed her hard, knowing it might be the last time, then stepped back. He had to tell her. But the look in her eyes stopped him. Something was going on, and the house was too quiet. “Where’s Micah?”

That was odd. Kera’s ex-husband had been out of the picture for years, then a few months earlier, he’d suddenly started asking to spend time with his grandson.

“He kept Micah and served me with papers this morning,” Kera said. “He’s filing for full custody.”

Jackson’s jaw dropped open. “No shit? Just like that?”

“He says Micah is happier with him and doesn’t want to come back here.”

“Do you believe it?”

“I don’t know. Daniel probably gives him everything he wants and lets him eat junk food.” Kera’s lips trembled. “Micah’s been upset and acting out ever since I took him to California to care for my parents. But what else could I do?”

“This isn’t your fault.” Jackson tried to be comforting. “Daniel is just being a selfish dick. Does he really think he has a chance in court?”

“I’m so sorry. We can fight this. It’ll be expensive, but I know how much you love that boy.”

That could be a good thing, less pressure on him. Jackson hated himself for the thought. How could he break up with Kera now? Yet he didn’t have the time, money, or energy for a custody battle. Especially for a child who wasn’t his and didn’t want to bond with him. Overwhelmed, Jackson felt blood pound in his ears.

“I’m sorry I bothered you with this in the middle of your workday.” Kera straightened her shoulders. “It’s my issue, and I’ll deal with it.”

Jackson’s phone rang in his jacket pocket, and relief washed over him. He snatched it up and looked at the screen: Sergeant Lammers. “I have to take this.” He turned away from Kera, barely able to breathe, and picked up the call. “What have you got?”

A sharp pain in his chest. “An officer?”

“No. A young woman found dead at the top of Skinner’s Butte. Blood on her neck and arms.”