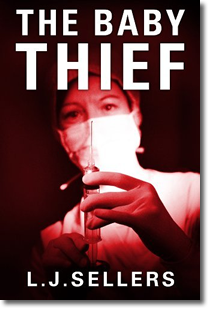 Elizabeth stared at the file on her desk, heart pounding with indecision. Say it! Her forehead went damp, and she reached for a tissue, avoiding her patient’s gaze. Ms. McClure sat calmly, waiting for her to speak. The patient had come to the Assisted Reproduction Clinic in good faith. How could Elizabeth violate that trust? She was a doctor!

The thought of Dr. Gybbs, her chief of staff, discovering her deception horrified her more than anything. She owed him so much. He’d promoted her to director of genetic science her third year with the hospital, passing over several male associates. Then Columbia had honored her with its Scientific Excellence award just last year. To risk all that. . . . Just say it!

McClure shifted in her chair. Elizabeth glanced at the file again and took a deep breath. “The test results show you have the genetic marker associated with cystic fibrosis.”

There, she’d done it. She’d told the lie that set the plan in motion.

Her patient’s eyes widened, then filled with despair. Elizabeth knew how she felt. Hearing that you couldn’t or shouldn’t have a baby was the most devastating news a woman could receive.

She wanted to reach out and comfort the woman. Instead, she leaned back and spoke casually. “Don’t be too alarmed. One out of twenty-two Caucasians is a carrier. But unless the father is also a carrier, your chances of having a healthy child are still good.”

“What does that mean?” McClure’s light brown eyes flickered with anger.

Elizabeth understood the anger too. But she couldn’t let herself feel kinship with this woman. McClure had something she wanted, something she was entitled to. She had to be strong to take it from her.

“In practical terms, it means before you have yourself artificially inseminated, the donor should also be screened for the cystic fibrosis marker.” Damn, she was making it sound too easy. Elizabeth didn’t want her coming back to the clinic any time soon. So she continued, “The test is more difficult with the limited amount of DNA in sperm, thus more expensive. If you wait until you’re pregnant, then have an amniocentesis, you’re faced with the decision of either giving birth to a diseased child or aborting it. Perhaps you should take some time to read up on CF. You may decide to consider other options.”

“Adoption.” Just saying the word made the old bitterness rise in her throat. Elizabeth swallowed hard to keep it down. “The joy of children isn’t limited to genetic offspring.”

If only that were true.

The summer of her tenth birthday crashed on her consciousness like a tidal wave. Standing by her mother’s grave, watching the casket being lowered, Elizabeth had wanted to throw herself in and let the earth swallow her, too. But her grief then was only the beginning. The whispering of relatives at the funeral was followed by the sudden crushing knowledge that she’d been adopted, that her beloved mother was not really hers.

Elizabeth had never considered adopting a child, even when she learned her ovaries were worthless, damaged—so she believed—by pelvic infections she’d suffered as a child. Before she could compose herself, another memory engulfed her. The drunken sweaty face of Ralph, her adopted father, grimacing in a strange blend of pain and joy as he forced himself on her.

Elizabeth felt the tremors starting, the buried rage fighting to surface. She’d never been to a counselor, never spoken of it to anyone. Even after learning she was sterile, she’d kept her silence. But the rage never diminished. It surfaced less often now, but with the same intensity.

Her patient’s voice, hauntingly familiar, broke through the anguish. “Do you have any literature about cystic fibrosis that I could take with me?”

She had to get this woman out of her office. Just looking at her weakened Elizabeth’s resolve. McClure had the same wide cheekbones and stubborn chin, the same wavy hair. “Here’s the name of an organization you can call for information. They can also put you in touch with a support group.”

Elizabeth stood and handed McClure a card, willing her to leave. She didn’t want to see her again until she was unconscious on the operating table. Elizabeth wished there was another way, but the laparoscopy was a simple procedure and wouldn’t hurt her at all.

What about afterward, she asked herself for the hundredth time? The drugs would wipe out McClure’s memory, but what if the oocytes didn’t fertilize? What if the transfer failed? Could they keep her until she ovulated again?

Don’t think about it, she told herself. David was a great embryologist. If anyone could make her pregnant, he could.
“Thanks,” McClure said quietly, tucking the card in her purse. She squared her shoulders and wiped mascara from under her eyes before turning to leave.

Elizabeth admired her composure, her refusal to cry or complain like so many did at the first sign of trouble. She was a sturdy woman physically, too. An inch or so taller than Elizabeth and meatier all over. Not overweight; just robust, healthy. Elizabeth felt of pang of jealousy. She had always been pale and thin from spending long hours in the lab and skipping meals.

“Good luck.” Elizabeth bit the inside of her cheek. She had a sudden urge to call her back. Maybe they could become friends and eventually she could ask . . .

No. She couldn’t take the risk.