Life of a Cop

I interviewed Sergeant Kathy Flynn who supervises the violent crimes detectives in the Eugene Police department. The first interview was interrupted by a homicide scene. (Scroll down for that story!) But I went back later and heard some interesting stories, so I thought  I would share.

Eugene only averages two or three homicides a year, but that doesn’t make the job of the police any less dangerous.As a patrol officer, Sergeant Flynn almost shot a man once while assisting with a traffic stop. The driver became agitated and threatening.

“The other officer had his weapon drawn,” she recalls. “So I drew mine. Then the man reached for something in his truck. I thought he was going for a gun. I was sure it was a gun.”Then he came up and shoved his hand out the window,” she says gesturing with surprising force. “The other officer fell back. I had pressure on the trigger, but I didn’t have a shot. It turned out to be a tape recorder. I almost killed a man over a tape recorder.” 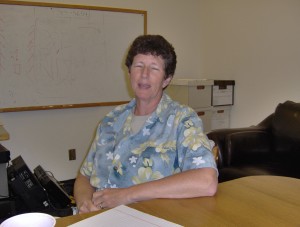 The only reason the man, who was originally stopped for a traffic violation, didn’t die that day is because the incident took place on 13th and Kincaid with UO students everywhere. Flynn couldn’t risk injuring a bystander. Ultimately, they wrote the traffic ticket and let him go. Apparently there’s no law against scaring the shit of cops.
Flynn’s levelheadedness and decision-making skills have served her well in law enforcement. She started as dispatcher, responding to 911 calls for a few years. Then at the urging of a police officer, applied for a position with the department and got it. It’s unusual to start a career in law enforcement in your thirties, but Flynn took to it with enthusiasm and soon earned the rank of agent (no longer used), then sergeant. She’s supervised patrol, worked as a detective, and been assigned to local schools.

“I love patrol and detective work. They’re different, and they both have their upsides,” she says. Flynn tells another story about a man who was crazy on PCP. They tried to subdue him and he shrugged them off. Not even batons to the back of his legs were persuasive. He simply looked at her and said mockingly, “Ouch.”

“If you had told me when I was in my twenties working in a bank that I would end being a cop, I would have laughed at you,” she says, shaking her head.

It’s funny where we end up sometimes. Are you working a job you would have never believed?