This is the first post in a series about exceptional women in Eugene.

For most young women, planning for college is a matter of filling out paperwork. For Hoang Nguyen, a native of South Vietnam who’s now a cardiothoracic surgeon, it meant putting her life on the line, crossing a treacherous ocean in a boat with a converted motorcycle engine, and braving unimaginable hardship. 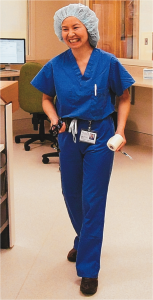 As a 17-year-old in South Vietnam in 1981, Hoang (pronounced Whan) had no chance of higher education. Her father had worked for the U.S. military, so the communist government, which had recently taken over, would never allow her anyone in her family to attend a university.

Hoang was determined to leave the country. “I always wanted to go to school,” she says, “and everyone said the United States was the best place to get an education.”

Hoang’s parents learned of a boat planning an escape and helped recruit enough people to make it possible. In exchange, they earned places on the boat for Hoang and two of her siblings. Others who hoped to leave paid in gold — usually a significant sum in a country where paper currency had little value.

The boat was made of wood, barely seaworthy, and powered by a converted motorcycle engine. Still, 117 people boarded the craft while bullets flew over their heads. If they had been captured, prison or labor camp awaited them.

“At that time, I thought the worst thing that could happen was that I would die,” say Hoang. “I was so naïve.”

The boat was intended to hold 60 or 70 people, so with 117 on board, the conditions soon became unbearable. “I stayed out on the open end of the boat,” Hoang says. “I got soaked from the rain, and my sister and I had to tie ourselves to the boat sometimes to not get washed overboard, but I couldn’t go in the covered part. It was too horrible.”

For seven days and six nights, they were at sea. Storms raged, the engine broke down once, and they ended up off course. “You feel so small out there,” Hoang says, her beautiful face beginning to show the emotional toll of telling her story.

They finally arrived on the tiny island of Kota in the Philippines.

Hoang spent the next two years in a series of refugee camps, living in tents she and her siblings made from what they could find in the surrounding jungle. Nearly 30 years later, it still makes her cry to remember some of the other young women in the camps who had been raped or forced into prostitution. “I was very lucky,” she says.

Hoang was also very determined to get to the United States. If she had been willing to settle for Australia, she could have left the camps in six months. Entry to the U.S. was more difficult, and she endured repeated interrogations about her interest in coming to America.

Finally, at the age of 19, she arrived in Oklahoma, sponsored by a Baptist church. Hoang soon enrolled in community college and learned English as she went along. She started with science classes because “a formula is a formula in any language.” While earning a five-year pharmacy degree, Hoang applied to medical school at the University of Oklahoma.

“I thought at first my English wasn’t good enough for medical school, that’s why I went to pharmacy school,” she recalls. “But I wanted to be a doctor, so I applied anyway.”

It’s easy to think the admissions board must have been impressed with all that Hoang had accomplished in a few short years in a new country with new a language.

Her accomplishments were just getting started. She went on to earn two medical board certificates, one in general surgery and one in thoracic surgery, and she’s currently the only woman surgeon on staff at the Oregon Heart and Vascular Institute.

As a young altruistic doctor fresh out of medical school, Hoang applied to return to Vietnam, wanting to help people who had not had her good fortune. The Vietnamese government turned her down. “I got mad that I was not welcome even as a volunteer,” she says. “So I’ve never been back.”

Hoang practiced in New Mexico for years, then left when the hospital and physician group changed owners and became a for-profit organization. One of the appeals of the Sacred Heart position was its nonprofit status.

“I love taking care of people,” Hoang says of her job. “I love to see them get better because of my help.”

L.J. adds: Hoang is one of the bravest and most determined women I have ever had the privilege to meet.