This is the third post in a series about exceptional women in Eugene.
It takes a special kind of person to be so committed to a goal that it factors into nearly every single life decision. Sarah Bertram is that kind of person. The 26-year-old champion weightlifter has her eye on making the 2012 Olympic team, and she won’t let anything get in her way. Vacations are out of the question; they take too much time away from training. 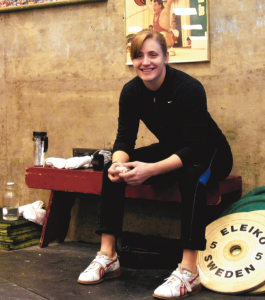 Even a two-day skiing excursion must be sacrificed because the potential for injury is too high. Staying out late and skipping meals after a workout are not options either, no matter what fun activity her friends have planned.

“It can be hard to have a flexible social life,” she says, “but I love this sport. I love the challenge and the hard work.” The challenge requires Sarah to train five days a week. For 90 minutes, she works the bar and its free weights, exerting her way through dozens of squats and lifts. Afterward, she powers through some pull-ups and ab work just for good measure.

Sarah makes a point to clarify that Olympic weight-lifting and powerlifting are distinctive sports, each with their own bar, plates, techniques and lifts. She also doesn’t want her endeavor to be confused with bodybuilding, which is in another category that is “completely aesthetic.”

Sarah’s dream of making the Olympic team took a giant leap forward in 2009 when she won the U.S. national championship in her weight class (69 kg/152 pounds), making her the best “light heavyweight” lifter in the country. Her trip to the world championships in Korea in November 2009, where she placed 16th, brought her even closer.

“When you compete at this level, you get to point where you can’t just muscle something anymore,” she explains. “So it comes down to technique and mental focus and momentum. It’s a lot more technical than people think.”

A passion is born
Sarah’s passion for the sport began in high school when she started weightlifting as a strength-training workout for her track-and-field pursuits. “Olympic weightlifting has good carryover functionally for any sport,” she explains. “It builds explosiveness and speed and strength.” The training paid off and as a high school senior, Sarah qualified for state competition in the javelin. She grew to love the challenging new sport and it soon became her athletic focus. During her four years at the University of Oregon, where she earned a bachelor of fine arts degree, Sarah trained independently at Ironworks Gym in Creswell. Most colleges, including the UO, don’t support Olympic weightlifting teams, so the athletes must join local gyms and clubs to train and compete. Sarah feels fortunate to have access to a gym with the right equipment and a skilled trainer.

Her coach, Tom Hirtz, who was once an Olympic competitor, has been with her at every training session for the past nine years. “When I met Sarah, she was a young, skinny girl who was not that strong,” Hirtz recalls. “It’s been a long, hard road for her, but she has the special determination that only few have. She has a lot of guts, diligence and a real strong work ethic. Now she’s getting to the top of her game.” After Sarah placed fourth in the national championships in 2008, Hirtz wrote on the board in the gym: “Sarah Bertram, 2009 National Champion, 69 kilograms.”

The weightlifter saw that goal every day for a year. Then she went to the meet and made it happen. In 2010 she placed sixth in the national championships, bringing her a step closer to her Olympic-team goal. “This sport has made me confident and focused,” she says. “And that carries over into every other area of my life as well.”

Benefits of weightlifting
Sarah’s belief in the benefits of weightlifting motivated her to join Coach Hirtz in his volunteer outreach to at-risk youths in the John Serbu detention center. Three days each week for the past six years, Sarah has volunteered her time and passed along her training to help troubled young people build confidence and self-discipline.

“Sarah is such an inspiration to these kids,” Hirtz says. Although she won’t always be a national competitor, Sarah believes Olympic weightlifting always will be part of her life. She also thinks more women would get involved in the sport if they understood it better. The misconception she would most like to correct is that “Olympic weightlifting will make you big.”

“It takes a long time to get big,” she explains. “And you can stop accelerating long before that happens. When I first started lifting, I lost weight and got more toned.” As a fine arts graduate, Sarah’s second love is ceramics and she looks forward to having more time for her art someday. But she has no regrets about her choices or focus, adding, “If I look ahead 10 years from now, I know I’ll be happy that I did this while I was young and tried to be the best I could be.”