Why I Love Eugene

Characters everywhere! You can run into the most interesting people just cruising around, but as newspaper writer, I get sent to interview them. It’s wonderful! One day last week, for example, I interviewed Omer and Dave Orian, red-afro-sporting Israeli brothers who operate Off the Waffle out of their home (and a cart near the UO). “Obsessed with waffles” is how Dave describes them and their business, which has a very loyal following. (You have to click through for the photos!) 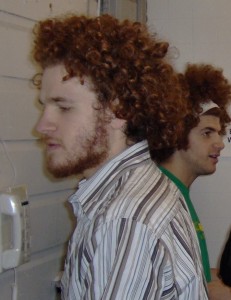 At 26 and 24, they’ve lived in Israel, Belgium, Africa, and California to name some, and they’ve traveled to many other places. Now they make “the world’s best waffles” in Eugene. (Think crispy outside, fluffy inside and topped with Havarti cheese, apples, and cinnamon, as one example) The brothers seem quite happy about all of it. They’re bright, friendly, and so laid back. They put out crayons and markers so their customers can draw on a waffle bag, then they post that art all over the restaurant’s walls. 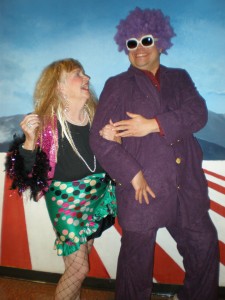 On the same day, I met with Patrice Dotson, a lovely women who decided at age 77 to take a comedy writing class, then perform stand up. She spikes and dyes her hair a shocking pink for her gigs, transforming herself from a harmless grandmother to an eye-catching entertainer. Her material includes bits about “what not to do in church” and “small penises,” which she finds “as funny as it gets.” This is a photo of her dressed for Halloween. Delightful women! Catch her act at the NW Women’s Comedy Festival on Nov. 21.

On days likes those, I love my job and my hometown. Only in Eugene.