“We handcuff dead people.” That was the takeaway message after an afternoon spent participating in an active-shooter training. Of course, I wasn’t one of the law enforcement officers doing the actual training (darn!), but I did play a role that helped make the scenario as realistic as possible.

My job for the afternoon was to run screaming across the top floor of an abandoned office building—which served in the scenario as a federal courthouse. The trainers wanted the sessions to be high intensity with lots of noise and distractions. So first, a loud siren came on. That started my adrenaline pumping. Then it was time to pull on my facemask and get into place. The mask was for protection against the paint-like pellets in case someone shot me.

Moments later, a man in green fatigues came running straight at us—across the long, cement floor—with an AK-47 in hand. Then our instructor signaled the three of us to go. And we would run, yelling something like, “Help! They killed Dave. They’re shooting everyone.” And screaming too. He wanted us to be loud and distracting. 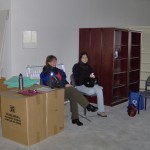 It was weird at first, because I’m not a screamer, but I quickly got into character. Between the assault weapons and the siren and the sudden barrage of uniformed officers pointing more guns—it was easy to feel alarmed. (Picture: The other two “screamers” wait between training sessions)

We ran the scenario seven or eight times, with different groups of law enforcement personnel getting their turn. People from Homeland Security, Lane County Sheriff’s Office, and Eugene and Springfield Police all participated.

After the first few times, my adrenaline settled down a little, and my observational journalist side kicked. I began to notice that each team of officers did things a little differently. For example, another participant played a wounded Federal Marshal. Some officers checked him briefly and moved on. Others patted him down and took his weapon. Still others instructed him to crawl out of the room.

And then there was the armed bad guy at the top of the stairs. He got shot every time. And in each debriefing following the scenario, the instructor would at some point say, “We cuff dead people.” Meaning, you don’t just walk away from the bad guy, even if he looks dead and you have his gun. You cuff him to be sure.

The afternoon is one of those vivid memories that will not likely fade. And that phrase will always stay with me. Don’t be surprised if you see it in one of my novels someday.