Archive for the Jack Getze Category

The Power of K

I originally posted this blog on BookBitch about eight months ago, but yesterday I read a manuscript that had eight or more characters whose names started with K. So I realized it was worth posting again.

Marketers and comedians have long taken advantage of the powerful K sound. The K sound is especially emphatic at the end of word, which is why Jack and f**k are both so fun to say. Can you think of a comedian who can get through his/her material with saying f**k or jerk or some variation of jack (jackoff, jackass, jackshit)?

Crime writers (maybe all writers) love the K sound too, they just may not realize it. Think about the name Jack for protagonists. Jack Ryan, Jack Reacher, Jack Keller, Jack Taylor, Jack Davis, Jack Carpenter, Jack Irish, and Jack Palms to name just a few. Then there’s Taylor Jackson and my own Detective Wade Jackson. Not to mention the Jakes (Jake Riley, Jake Riordan, Jake McRoyan, and more).

The X sound is really K with a little S on the end, so Alex is almost as popular with crime writers: Alex Cooper, Alex Cross, Alex Archer, Alex Delaware, Alex Duarte, Alex Bernier. And Cooper and Cross are both pronounced with the K sound. Then there’s Kinsey Milhone and Greg McKenzie, which has a trifecta of winning sounds: the double K sound and the popular Z. Marketers like Z almost as well as K.

In my recent novel, THE SEX CLUB, which has both K and X sounds in the title, the main characters are Detective Jackson and Kera Kollmorgan. Jackson’s daughter’s name is Katie. In women’s fiction, Kate is the female equivalent of Jack—a short, powerful K name (Kate London, plus many others).

It’s not just me. Author Jack Getze has a protag named Austin Carr who encounters a bad guy named Max, whom he calls Creeper. In as single scene, he writes about Carr and Creeper as well as an AK-47, Alka-Seltzer, a stockbroker, an Escalade, a Caddy, and a Lincoln.

Another writer told me, “I had so many K names in my first book I had to change all but one.”

What is it about the K sound that we like so much? One amateur theory is that as babies, we all heard a lot of K words and noises: cootchie-coo, cutie-pie, cuddles, etc. But it could be that this is simply one of those things that is hard-wired into our brains from human experiences long ago. Whatever the reason, readers and writers like the sound K, so keep it coming … just not all in the same book. And give Jack a rest.

Bouchcon: Live in the Moment 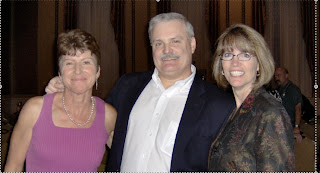 Kudos to everyone who was able to blog about Bouchercon while they were there. I had good intentions, but I was just too tired at the end of each day to feel coherent. I also failed to take very many pictures. But I decided early in the conference that it was more important to experience every moment and to meet every person that I could rather than to record the event in detail. I decided to live in the moment. For example, it made more sense to me on my last night there to go out to a late dinner with other writers (including Simon Wood) than to sit in my hotel room, blogging about the day. It was the right choice. (Above picture is me with Shane Gericke and Robin Burcell.)

My objectives for the conference were to meet as many people as I could and to give away as many books and promotional materials as I could. I also hoped to get know Karen Syed of Echelon Press. I accomplished all those things. And more. Here are some memorable moments.

I met Troy Cook, author of 47 Rules of Highly Effective Bank Robbers. He is a sweet, modest man who is rapidly on his way to the top. Hearing his story—having several agents fail to sell his book, then getting picked up by a small press on his own, followed by great reviews, awards, great sales, and a movie deal—was very inspiring.

I also shared a long shuttle ride to the airport with Julia Spenser-Fleming, (an award-winning mystery author) and we talked seamlessly for more than an hour. She’s bright and friendly, and I enjoyed her company. She probably won’t remember my name, but you never know. I feel like I made a connection with her.

The panel I was on Saturday morning with Bob Morris, Jack Getze, Rebecca Drake, and Marion Moore was a blast. Bob and Jack told wild stories about their days in the newspaper business (including large amounts of alcohol and occasional gunshots), and I got in some good jokes about working for a pharmaceutical magazine. Being anal, I also prepared a handout for the attendees, listing about 20 authors who write about reporter characters. So that roomful of people will remember me. It’s important to promote other authors when you can and to resist the urge to talk incessantly about your own book. In fact, when I met an online friend and mystery lover, he commented that was what he really liked about me—that I’m everywhere online, making friends and being nice, but never going for the hard sell.

Another observation: People who are friendly online are friendly in person! And mystery fans are great—warm, friendly, and happy to meet anyone who writes the stories they like to read. In fact, Kaye Barley may be the sweetest person I’ve ever met. (Picture below: Michelle Gagnon and Ken Bruen)

I may keep adding to this blog as I sort through my notes and business cards, so check back.