Archive for the Karen Olson Category

I’ve been thinking about redesigning my website. When I first put it up I was in a hurry, needing a web presence ASAP to support various promotional activities I had going. A graphic artist/friend designed the pages—and I liked the look—but I didn’t know what I really needed or wanted at that point. So for the last few weeks I’ve been asking about people’s favorite author sites and looking at dozens of websites to see what design elements they have in common (and what they have that I don’t). Here’s my findings.

For crime authors, most sites have a black or dark grey background with white text and red accents. So in that regard, my designer knew exactly what she was doing. Good examples:
Michelle Gagnon
Alafair Burke

Most of the popular sites also have very little text on the opening page (or top half of the opening page). Instead they have vivid pictures (often changing) and book covers. About half of favorite author pages have their photo on the opening and half don’t. Examples:
Alexandra Sokoloff
John Sandford
Nora Roberts

Many of the informal-survey favorites have a blog built into their site and others have page that is distinctive to their site—Sticky Notes, photographs, Fan of the Day, character bios. Examples:
Thomas Holland
JA Konrath
Chris Grabenstein
JC Hutchins

Almost every popular site I looked at had a row of clickable navigational links across the top of the design and often down the side as well. Many also had pull down menus from those tabs.

What they don’t have:
I was surprised to see that many author websites don’t have obvious BUY buttons. They may be buried somewhere but you have to search for them. And many do not have links to the home page on every other page. On some of the sites, I found it impossible to get back to the home page at all.

Overall, my favorite for design is Karen Olson’s. She hit all the right elements—clean gorgeous opening page, easy clickable navigation, black/white/red color scheme, access to the home page on every page, and big buy buttons. The only element she lacked that some others had was the unique page.
Karen Olson

And J.A. Konrath gets honorable mention for having the most usable content and an easy to navigate structure.
JA Konrath 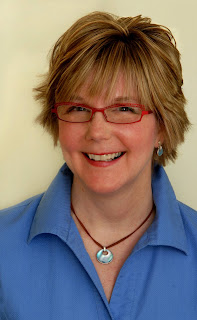 If you like mysteries with original flair, great dialogue, and sassy humor, let me introduce novelist Karen Olson. I recently read Shot Girl, featuring newspaper reporter Annie Seymour, and thoroughly enjoyed it. (And as I may have mentioned recently, I don’t finish many of the novels I start.) Shot Girl opens with Annie musing over the dead body of her ex-husband. Who can resist that? Then it gets rolling when the police, while fetching flip-flops from her car for her, find a gun that matches the shell casings by the body. This fast-paced delightful tale is the last installment in the series, but Karen is busy writing another set of mysteries starring a tattoo artist. Sounds like more good fun. Karen was also sporting enough to answer a few questions.

Las Vegas tattooist Brett Kavanaugh gets mixed up in the disappearance of a woman who was last seen in Brett’s shop making an appointment for devotion ink to surprise her fiancé, whose name is not the name she wanted on the tattoo.

What is your best moment as a novelist?
While I’m writing and the story begins to build momentum and it takes on a life of its own. 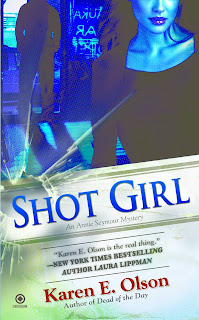 What is your worst moment as a novelist?
Worrying about whether I’ll get another contract.

If you could get one do-over in your career, what would it be?
I might not have given Annie as much of a potty mouth. I had no idea how people would react to that, and while it’s not gratuitous at all, I do know I’ve alienated some readers because of it. I do feel like I’ve got a second chance with The Missing Ink, though, and there is no cursing in that book at all. We’ll see if it makes a difference as far as readers are concerned.

What was the last book you read that made you think “I wish I’d written that”?
Stewart O’Nan’s Songs for the Missing.

Where can we find you on the web?
kareneolson.com and Wednesdays at First Offenders

Readers: Don’t you think Karen should let her tattoo artist swear just a little? Do you have a tattoo? Would you read a mystery about a tatooist?

Up early after a late night to start the day with a panel called We Didn’t Start the Fire. They discussed the balance of writing about social issues in fiction without being preachy. It made me want to take another look at my novel. I met Karen Olson and Neil Plakcy, and Karen may guest blog here soon.

Second panel of the day was Does Sex Sell? The discussion was more about whether sex scenes were necessary in mystery/crime fiction. No consensus was reached, except that romance outsells mystery 10 to 1.

I introduced myself to dozens of writers, gave away about 25 copies of The Sex Club, and handed out bags of books as a volunteer. No one is going home empty handed from this conference. I also had dinner with Karen Syed of Echelon Press, a funny high-energy dynamo. I think we could be an ass-kicking combo.