Archive for the contest Category

Naming characters is one of the best parts of writing a crime story, and readers seem to love to participate as well. So here’s another chance to name a character and win one of my books. I’m writing a fifth Detective Jackson novel, tentatively titled Dying for Justice. Read more →

I’m finally retiring the weekly giveaway of a print version of THE SEX CLUB—after two years and lots of money spent at the post office. I sent copies as far as Portugal! Instead, I’m starting a weekly e-book giveaway of my new standalone thriller, THE SUICIDE EFFECT. You can enter today by simply e-mailing me with the words Win: The Suicide Effect in the subject line. Read more → 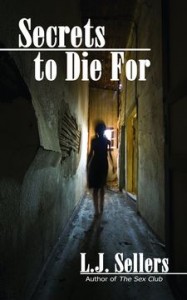 I’ve had so much great feedback on SECRETS TO DIE FOR I’ve decided to give away a few more copies. This time you have to earn it by coming up with a great name for one of the characters in my next novel, which I’ve just started outlining. Here’s what I know about the characters so far: Read more →

In the course of writing a novel, you have to come up with at least 15 names, possibly as many as 40, depending on the genre. Police procedurals (my current genre), with lots of suspects and neighbors to interview require an endless stream of names. For minor characters, I often go with whatever pops into my mind. Sometimes, it works out and sometimes not so much. Read more →

I’m at that point in my new story where I need to settle on some character names. I’m writing a series, so the recurring character names are decided (like them or not). For others, I often grab a moniker for the moment and keep going if the writing is flowing, then go back and search/replace when the perfect name comes to me. Sometimes, the first name that comes to me is the right name. I love it when that happens.

I have also changed the name of main characters after writing the entire novel. I hate when I have to do that. After thinking about a character as “Sierra” for six months, it’s hard to let go of that identity. And now it’s hard to remember her new name when I’m discussing the novel, which is embarrassing. But I changed it because I had too many female characters whose names ended with “a” (the schwa sound).

What I need now are bad guy names, and I feel stumped. So I’m having a contest.(My brother asked me to name one of the antagonists after him, so one down, two to go.) One of the bad guys runs a strip club and various other sleazy deals, and the other is the ultimate con man/misogynist, who puts on one face for the public while engaging in the worst sort of behavior behind the scenes. That’s all I can say without giving away the mystery.

I’ll give away two copies of THE SEX CLUB — one to each of the top two submissions. You can post your submissions in the comments section, which could be fun for others and/or e-mail them to me, using the link on the right.

True character-naming story: When I was writing THE SEX CLUB and needed a name for the psycho bomber lady, I picked Ruth because it’s short, strong, and Biblical. I picked Greiner because it’s the name of a street near my house. Three years later, I was horrified to learn there was a woman named Ruth Greiner who is an avid mystery reader, leads a mystery book club, and is on the same popular mystery list serv that I am. She got wind of the name through a review of THE SEX CLUB in Mystery Scene magazine and e-mailed me to express her displeasure. (So don’t submit one of your relative’s names, unless he/she never reads anything but Mad magazine.)

Even if you don’t enter the contest, share your “I wish I could take it back” character-naming story!