Name a Character—Win A Book

I’m going gangbusters on my new Jackson novel (#9), but I keep getting stuck trying to decide names. So I often throw something in—so I can keep writing—and tell myself I’ll think of the right name later.

Well, 20,000 words in, it’s time to settle on some names. And readers are always so helpful, I’m asking everyone to pitch in again. I’ll make it worth your while, of course, by giving away a print copy of Crimes of Memory, Jackson #8 to my favorite submission, or if you prefer, an ebook when it’s released on Oct. 15. I also have print and ebook ARCs of The Trigger, a standalone thriller coming out January 1 for other entries I like. Winners get to chose their prize.

In this new (nameless) story, Jackson investigates the death of a young woman who works as a caregiver but has a shadowy existence and no connections to anyone. I need a name for her and her three-year-old son, who becomes quite attached to Jackson.

My first thought for the boy was Cory, but I already have too many K sounds in Jackson’s personal world (Katie and Kera). So I switched his name to Milo, which I really like, but sadly, I decided the name is too much like Micah (Kera’s grandson). I try not to confuse readers. So I’m looking for something sweet—for the boy, that is. (I’m personally trying to give up sugar…again.)

In addition, one of the suspects is a fourteen-year-old who lives next door, a skater who claims to hate guns and violence, yet has a collection of knives He needs a more compelling name than Josh, the placeholder I’m using.

And being one of my complex mysteries, there’s a second victim, a star UO football player, a quarterback with emotional baggage that I really can’t reveal. So I need three young male names of varying ages.

Feel free to submit for all, or just one…if it seems perfect. You can leave a comment or email me with your submissions. Thanks for participating.

The New Jackson Story Is Here 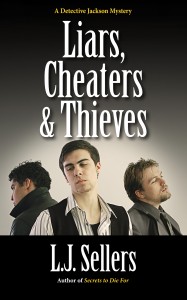 As you may have heard, the new Jackson story, Liars, Cheaters & Thieves, is now available. With each of these novels, I try to feature different crimes, different types of victims, and different story structures. In this one, the victims are male military veterans, a subject I’ve wanted to write about for a while.

But I didn’t want to immerse the plot in the military culture, so like my other Jackson stories, it’s set in Eugene. Liars, Cheaters, & Thieves also includes some features unique to Eugene that I’ve been wanting to work into a story, so you’ll get to know my hometown a little better.

Here’s the back cover copy:
Thursday night, a young veteran’s throat is slashed in a parking lot. Friday morning, an older women dies of a heart attack when she realizes her bank account has been cleaned out. The homicide-scene evidence points to the man’s cheating wife, but when Detective Jackson finds bizarre materials in their home and a link to a phony charity, the case gets complicated. When another man is killed, Jackson and his team decide to follow the money—but can they find the trail before anyone else is murdered?

I’m giving away a free ebook to anyone who comments or subscribes to my blog or newsletter today. In addition to commenting, email me and let me know if you want a mobi (Kindle) or epub file.

I’ve already got an idea for my next Jackson story, but I’d love to hear suggestions for subjects or social issues that interest you.

Thanks for stopping at my blog and supporting my work.

As a thank you to readers who’ve supported me and made it possible for me to write full time—and in celebration of my birthday—I’m offering all five Detective Jackson books on Kindle and Nook for $.99 for the month of July. If you own another type of reader and want to take advantage of this offer, contact me. Read more →

I finished the first draft of the fifth Detective Jackson story and it’s now in the hands of beta readers. This is the nerve racking part! But the early feedback is great, and my husband loves the first two chapters. This is a very good sign because he’s my toughest critic. For those who have been reading the series from the beginning, I wanted to share some background on this story. Read more →

Naming characters is one of the best parts of writing a crime story, and readers seem to love to participate as well. So here’s another chance to name a character and win one of my books. I’m writing a fifth Detective Jackson novel, tentatively titled Dying for Justice. Read more →

The fourth book in my Detective Jackson series was the most challenging to write so far. I used parallel structures to tell overlapping stories. In the main story, Jackson investigates the deaths of a slain family. The parallel plot starts six weeks before the murders and tells the family’s story, with each victim narrating a POV section, leading up to the murders. Thus the name, Passions of the Dead.

Have you set aside a novel in progress because it was just too hard to write at that point in time? I just did. The futuristic thriller is on hold and I’m back to working on the fifth book in my Detective Jackson series. I feel so relieved.  I still plan to write THE ARRANGER (set in 2023), but I’m not in the right space to do it now.

It’s hard for me to admit something is too challenging, but that’s the truth of this situation. Because I’m still a full-time freelance editor, Read more →

This question comes up dozens of times while I’m writing a novel. Almost every character is given two names (and sometimes a nickname), but what you do you call them most consistently? First name or last? Does their gender and/or role in the story dictate which treatment they get?

I’m reading a John Sandford novel now (one of my favorites!), and I noticed patterns that made me wonder how authors make these choices. Read more →