Archive for the marketing Category

To Serial… or Not?

My eighth Jackson novel is completed, except for the Thomas & Mercer editing process. When I submitted it in early December, I expected it to be released in the fall of this year (2013). But the T&M schedule is full, and Jackson #8 isn’t slotted until next February (2014)—a full year after Jackson #7 releases next month.

Waiting makes me (and most of

my readers) crazy, so this schedule isn’t good for me. My editor offered me an alternative: release the book as as a Kindle Serial this spring and summer, which means it will be on the market, in full, by this fall.

But the serial aspect makes me nervous. Even though serial books are clearly labeled—so readers should realize they’re only getting chunks of the story at a time—the books often get bad reviews. Many readers hate waiting for the next “episode” and give the novels one-star ratings. They also use much of their review space to criticize the format.

My editor thinks it’s an opportunity to take advantage of advertising avenues that aren’t offered to traditional books. He thinks it could expand my readership. I like both of those ideas. And I love my editor. He’s been right about many things. But I’m worried about my current readership. They like to read my books in a couple of big gulps. And I like them to rave about “not being able to put it down.”

Of course, readers don’t have to buy it as a serial. They can wait until all the episodes are released and buy the whole book in the fall. But that means waiting three months to buy the book, knowing that some, or most, of it is already available. If you buy it as a serial, it’s only $1.99. I think you pay full price ($4.99) if you wait.

But my biggest concern is that many readers will not understand the serial process. Because I’ve never released a Jackson book that way, they might just see the new story and buy it—without reading all the disclaimers. Lovely, loyal people that they are. But two or three chapters in, the book will stop, and they’ll have to wait a week or so for more.

I don’t like to read that way, and I suspect my Jackson fans don’t either. So I’m leaning toward saying no. What do you think, readers? Does the serial idea appeal to you, especially if you’ll get the story sooner? Or would you rather wait and get the book all at once early next year?

Putting Sex Back in the Series 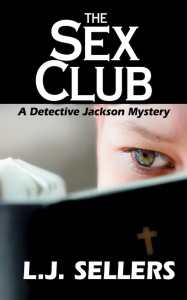 After all the trouble of taking Sex out of the Jackson series, I’m about to put it back. Some of you may be thinking, It’s about time. But those of you who know the series, know that I was talking about The Sex Club, the first book to feature Detective Wade Jackson.

Late last year, I pulled it as the lead Jackson story and moved it into my standalone thriller category, mostly for political reasons (see blog). The book features a Planned Parenthood nurse and crazy anti-abortionist (protagonist and antagonist, respectively), and I made the change so the first book in the series would be more palatable to all readers.

I worried that some readers would simply be turned off by the title. Many other readers bought the book for the title. Either way, at this point Amazon Publishing/Thomas & Mercer owns the rights, and they plan to market it as part of the series. By the time their version comes out in January with all the other Jackson books—including the new one, Rules of Crime—I’ll have modified my website, bio, and book listings to match up with Amazon’s marketing.

Once again, The Sex Club will be the first title many readers see when they visit my website or see a list of my books. I have mixed feelings about this. I love the story, and I’m proud to be its author. But it’s the only title I have that doesn’t really reflect the crime-fiction genre that I write in. Hopefully readers will look beyond that book and see that I’m really about crime, violence, and death. 🙂

When my kids were growing up, I used to say I’d rather they watched sex scenes in movies than violence, but that’s another subject.

For the record, I could have objected to the strategy to market The Sex Club as a Jackson story. Amazon is very concerned with my input and involves me in all decisions. But I trust them to know what they’re doing. And I’ve felt guilty about moving the book since I made the change.

The Sex Club is different from the others. I wrote it as a standalone with two main characters, one a nurse and the other a homicide detective. So it’s little different from my other police procedurals. But I knew I might bring Jackson back. And for readers who like to start at the beginning of a character’s development, it’s only fair they know about the first book. (Which I’ve tried to do anyway by including phrases like “featuring Detective Jackson” in my marketing text.)

Maintaining an email newsletter list and sending out professional, attractive emails is critical for nearly anyone who likes to stay in contact with a group, whether it’s a book club or fan base. Many providers offer this service, and a few offer it either free or for pennies on the email, making it an affordable option even for Christmas newsletters. Read more →

“Ninety percent of your sales will come from word-of-mouth or digital promotion by 2011.” I read this striking prediction in late 2009 and made a note of it. I think it’s already true for upcoming novelists like me. The second part of the original post was even more important: How do you change what you’re doing today to be ready for that? Read more →

Novelists are learning to be marketers. We Twitter, and blog, and send out e-newsletters. But branding is a little elusive. It goes hand in hand with platform, a concept that’s also a little squishy for novelists. Still, the branding basics can be tweaked and put to use for book promotion. Here are the fundamentals, which I made note of long ago.

Here’s 10 things your friends and family can do to help you and your book catch a little online buzz:

Crime writers and readers have been discussing the proper etiquette for collecting e-mail addresses for a newsletter or new-release announcement. Some readers are quick to say that any unsolicited communication is spam and will turn them away from a writer forever. Ouch! Read more →

I did some research yesterday into the top five providers of email newsletter/contact services. They all offer design and list management tools, a sign-up function for your website, and usually a free trial. The pricing doesn’t vary much, but there are important differences in services. Three offer a pay-as-you-go option for people like me with small lists who plan to use the service infrequently, and only two offer RSS services. Here’s a brief guide: Read more →

How to Write a Marketing Plan

A friend recently asked for advice in developing a marketing plan—to submit to a major retailer. Some smaller presses now also expect authors to submit a marketing plan. I’m no expert, but I have developed several marketing plans, and I’m creating a new one for the September release of Secrets to Die For. So I decided to share what I know.

Actually, I have two type of promotional plans: one to send to publishers Read more →

Exposure! Grab What You Can

I’m headed for Portland today for the Pacific Northwest Booksellers Association tradeshow. I’m still surprised they chose me for an author signing (50 authors were turned away). I almost passed on this event because the fee is $125, I have to give away 50 fifty books, and drive two hours in each direction for a 30-minute signing session.

Why am I going? Because it’s an opportunity to meet bookstore owners/managers from all over the Pacific Northwest. It’s an opportunity to hand them my novel and my promotional flyer with all the rave reviews. Even if they don’t order my book, they will hear my name, see my story and series character, and file it away somewhere in their brain. And someday soon, they will order and stock my books.